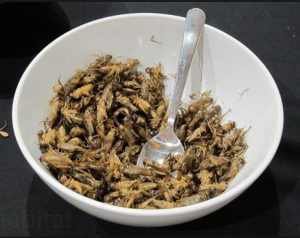 Want to boost your energy with high-quality, low-fat protein? Look no further than bugs.

According to panel discussions held at the 2014 Institute of Food Technologies (IFT) meeting late last month in New Orleans, insects are the food of the future. Not only are they good for you, they’re a low-cost alternative to animal protein with far less impact on the environment.

And if this sounds ridiculously futuristic, think again; cricket-based protein powders are already hitting the market here in the U.S.

“Some insects are as much as 80 percent protein by weight and provide more essential amino acids than most animal proteins,” said IFT panelist Aaron Dossey. “They are also rich in nutrients like omega-3 fatty acids.” Insect protein is also easily digested….