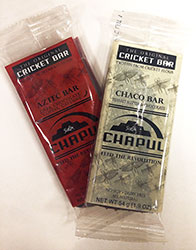 Because of the deleterious effect animal agriculture has on the water supply and other natural reserves, new food sources must be considered. The practice of growing and consuming animals for protein is not sustainable. So what’s the alternative? Insects. During the session “Real Pioneers: Experience with Insect Ingredients, Processing, Products, and Marketing, speakers discussed the virtues and necessity of adding insects to the Western diet. Pat Crowley of Chapul Inc. said that insects are extremely nutritious and, in some cases, more nutritious than animal protein sources. Crowley first considered using insects as a food source when he learned that insects are a part of diets around the globe while he was doing conservation.

Close to 2,000 varieties of insects are eaten around the world, but the United States and Western Europe have cultural and psychological barriers to eating them. Crowley’s mission is to introduce insects into Western cuisine as a healthy sustainable protein. He had encountered significant resistance to the cricket-based energy bars he developed, but an appearance on ABC’s “Shark Tank” helped change perception and increase acceptance.