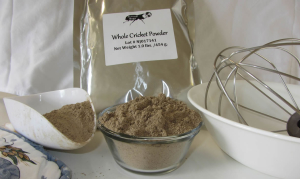 Aaron Dossey thinks crickets could provide life-sustaining protein to malnourished children in developing countries. So far, the Gates Foundation and U.S. Department of Agriculture have thought enough of the idea to give him more than half a million dollars to figure it out.

“When I first started taking this seriously, it was 2009, and I was having lunch with a group of entomology students,” Dossey says. “I was a post-doc and looking for areas to research. One of the people in the group said she was dedicating her career to promoting insects as a food source.

I thought that was amazing.”

A biochemist living in Athens, Dossey invented a new process to prepare crickets into a powder and just received another $450,000 from the U.S. Department of Agriculture to refine the process, test for allergies and do other research. Dossey started the work three years ago, when the Gates Foundation awarded him a grant to study the potential of using dried crickets in RUTFs, ready-to-use therapeutic food that is delivered to places where a natural disaster or some other crisis has led to food insecurity. “I thought, ‘Sure, I’ll give it a shot,'” he says. He founded All Things Bugs, a company to facilitate his research and spread the word about the benefits of bugs. (The company’s website even includes recipes for using the powder in everyday dishes.)

Dossey isn’t the only one working to create a protein supplement out of insects. The globe is dotted with researchers refining the process to dry and pulverize crickets into a powder that can be used as a supplement for health-conscious consumers or malnourished children. They argue that 30 percent of all land is devoted to livestock production, a proportion that is unsustainable as the world’s population grows.