5 Things We Learned from the 2021 Brood X Cicadas

The world has changed in countless ways since Brood X last emerged in 2004, and with those changes have come new ways of studying Brood X, as well as new evidence of the potential human impact on the insects. 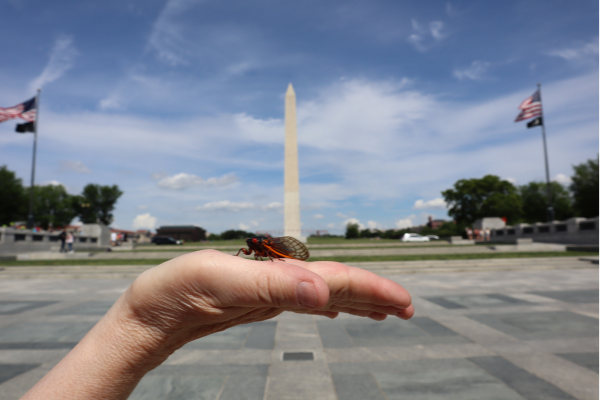 Below are five key takeaways from this year’s Brood X emergence, and insights into what these takeaways could mean for the future of the cicadas and the ecosystem we share with them.

1. Changes in Brood X’s time of emergence could be a sign of climate change

Though cicadas have existed for millions of years, and in that time experienced many significant climate changes, the long-term impact of human-induced climate change on cicadas is still uncertain. However, there are some indications that rising temperatures could already be affecting Brood X.

In 2017, many residents of the Eastern United States noticed small numbers of Brood X cicadas appearing in their yard 4 years earlier than expected. While periodical cicadas always have a small percentage of their brood, known as “stragglers,” emerge out of cycle, the unusually large number of stragglers that appeared in 2017 was a cause for concern for many scientists.

Dr. Chris Simon, a biologist at University of Connecticut, said at the time, “It’s impossible to tell [whether climate change is playing a role], but the fact that the climate has been warmer in the last decade or two means they have experienced longer growing seasons. We think the longer growing seasons have allowed them to grow bigger, faster.”

Cicada expert Dr. Gene Kritsky of Mount St. Joseph University in Ohio also noted several significant early sightings of what should have been members of the 2021 Brood X cycle, spanning from Pennsylvania to Georgia, which he suspected could be due in part to human-induced climate change. (Source: “Why Cicadas Are Showing Up In Your Yard Four Years Early),” Popular Science.

2. The proliferation of a mysterious “zombie” fungus

As the 2021 Brood X cicadas emerged from the soil, many were infected with an invasive fungus called Massospora cicadina, which contains similar compounds to those found in psychedelic mushrooms. The fungus had devastating effects on Brood X, leaving many unable to reproduce, and even turning some cicadas into so-called “fungal zombies.”

In many cases, Massospora cicadina actually caused the entire lower abdomen of an infected cicada (including their genitals and reproductive organs) to completely slough off, leaving the cicada essentially as a walking disembodied head attached to a white fungal “plug” that sprinkled its spores when the host flew around or attempted to mate (Source: “A Fungus Causes Cicadas to Mate Like Crazy, Even After Their Butts Fall Off,” Smithsonian Magazine).

Oddly enough, the fungus sent mating behavior into overdrive for some infected males, despite literally separating them from their reproductive organs. However, this strange fact makes a bit more sense when you consider that their mating behavior may actually be the result of a “zombie-like” system-takeover by the fungus. (Source: “A Parasitic Fungus Is Turning Brood X Cicadas Into Mind-Controlled ‘Zombies’,” IndyStar).

3. Technological advancements have allowed scientists to track Brood X more effectively than ever

Obviously, the technological landscape has changed dramatically since Brood X’s last emergence in 2004, and naturally, this has led to new innovative ways for scientists to collect data on the cicadas. In 2004, iPhones didn’t exist, most phones didn’t have internet and most people did not carry a camera everywhere they went. Today, smart phones are nearly ubiquitous (especially in the US where Brood X exists) and there are many online “citizen scientist” applications and projects available where folks can share all their natural experiences.

While some of these new techniques come from advancements in satellite imaging, genetic analysis, and other formal research mechanisms, some of the most significant advancements in data collection came from user-generated data. Popular apps like iNaturalist and Cicada Safari have allowed users to self-report Brood X sightings, giving researchers access to thousands of real-time observations every day.

Cicada Safari allows users to track cicada sightings on an interactive map, and even submit photos of their sightings. In June 2021, Dr. Gene Kritsky expressed awe at the sheer number of cicada photos submitted: “[As of June 2] we have over 400,000 cicada photos submitted.” said Dr. Kritsky, “We’re getting 16,000 photos a day.” (Source: “The Brood X Cicadas Are Here — and Yes, There’s an App for That,” MIT Technology Review)

4. Overdevelopment and agriculture may cause Brood X to go extinct in some areas

Brood X populations appeared to be much sparser in many areas this year than they were in 2004. One of the major contributors to this observed population decrease may be the building of new suburbs, farms and other land development projects that require cutting down trees (where cicadas lay their eggs) and paving over previously wooded areas (preventing cicadas from emerging out of the ground). Indeed the plight of Brood X is shared with nearly all biodiversity on earth as noted in recent studies demonstrating mass extinction, the “Insect Apocalypse” and other unfortunately devastating impacts from the Anthropocene.

You can hear Dr. Aaron T. Dossey, founder of All Things Bugs, give a concise explanation of the impact of overdevelopment on cicadas here.

This problem isn’t new. According to Muhlenberg College professor of biology, Martin Edwards, the number of cicadas we’ve seen over the past several cycles is “a fraction” of the numbers we would have seen prior to European colonization. One smaller brood of periodical cicadas, Brood XI, has been extinct since about 1954 due to habitat loss.

A report by The New York Times revealed that Brood X populations in Long Island, New York may be close to extinction due to urban sprawl in the borough over the past several decades.

You can also take a look at this animated map by Axios to see how paved land in the Washington D.C. area (a major Brood X hub) has increased over the past several decades, leading to reduced cicada populations in some areas.

5. Insects are the future of sustainable protein, yet there are better options than cicadas

When collected/sourced, cooked and prepared safely, Brood X cicadas are edible, and a great source of protein. “They have a buttery texture, a delicious, nutty flavor, probably from the tannins, from the roots of the trees on which they fed,” said University of Maryland entomologist Mike Raupp in an interview with the Associated Press, “and they’re… really good with a Merlot.”

While interest around eating insects has recently peaked in the U.S. due to the arrival of Brood X, eating “bugs” is becoming much more than just a novelty! As it turns out, cicadas are not nearly as good of a sustainable food source as other insects such as crickets and mealworms. Cicadas tend to take several years (for Brood X, 17 years!) to develop, which alone makes them very impractical as a reliable food crop. Additionally, they require the roots of large trees to feed on during this development, and do not successfully produce nearly as many offspring as other insects (crickets produce around 1,500 eggs per female!). What’s more, the subterranean lifestyle of cicadas means their growing environment cannot be controlled and they are exposed to various toxins and hazards such as heavy metals, pesticides, petroleum and other pollutants in the soil – so if you’re going to eat them, try to get them from a natural area away from cities and farms if you can find one! Their long life underground also further lends itself to bioaccumulation of these kinds of toxic hazards.

In fact, insect protein may be the key to a future of genuinely sustainable agriculture. Insects require much less water and space than traditional vertebrate animal livestock (such as pigs, cows, etc.), and contain high levels of nutrients such as protein, iron, and omega 3 fatty acids. Recent studies have also shown consumption of food containing insect protein (cricket powder) can provide benefits to gut health. Visit cricketpowder.com to learn more about the emerging insect based food industry and it’s benefits for health and sustainability! We also highly recommend the comprehensive book “Insects as Sustainable Food Ingredients”.