May 15th, 2014     Comments Off on Individual Insects Make Signature Venoms 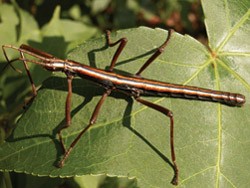 STICK IT TO ‘EM
Walking stick insects like this one can lash out at predators with noxious chemical sprays emitted from a gland behind the head.

Walking stick study hints at chemical biodiversity in these insects

It’s safe to say that not many people have milked the insects known as walking sticks for the defensive secretions the insects spray when threatened. Now, milkers in Gainesville, Fla., have used nuclear magnetic resonance spectroscopy to discover that the secretions of individual walking sticks are chemically distinct. “Single-insect variability of venom demonstrates the potential variability of chemical biodiversity at the level of individual animals,” the researchers say.

Walking sticks would never have perambulated into Arthur S. Edison’s laboratory at the University of Florida’s McKnight Brain Institute were it not for graduate student Aaron T. Dossey, an amateur entomologist who roams the Florida landscape collecting insects, including walking sticks. Dossey has repeatedly been on the business end of the insects’ chemical weaponry, which is extremely noxious to the nose and eyes.

END_OF_DOCUMENT_TOKEN_TO_BE_REPLACED

May 14th, 2014   About ATB   Comments Off on ACS Publications: Introducing our Authors

This project was my first chance to incorporate my passion for studying insects with my formal training in biochemistry. One aspect that I found most fascinating was that we were able to analyze venom from a single insect and discover unreported components of that substance. Such a discovery opens new doors to understanding arthropod chemistry. Indeed, only a tiny fraction of the total chemical biodiversity that exists in insects alone has been determined. I hope to continue exploring the large potential for discovery that exists in these creatures. Using cutting-edge technologies such as the microsample NMR used in our study of phasmid insect venom, we can now begin to push the frontiers of natural products chemistry. I am currently looking for future work involving medicinal and natural product discovery from invertebrates. (Read Dossey’s article on p 511.)

END_OF_DOCUMENT_TOKEN_TO_BE_REPLACED 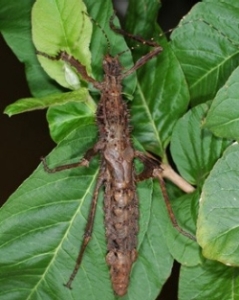 Walkingstick’s novel monoterpene shows activity against tumor cells
Camouflage is not the only trick Madagascar walkingsticks use to thwart their enemies. These insects also spray a defensive fluid, and a team of researchers hopes the fluid’s key chemical, parectadial, will ward off a human enemy: cancer.

The team, led by biochemistry professor Arthur S. Edison of the University of Florida, details their discovery and characterization of parectadial along with their development of a synthetic route to this novel monoterpene (J. Nat. Prod., DOI: 10.1021/np070151g).