All Things Bugs: We’re having conversations with a lot of mainstream food manufacturers

May 21st, 2015   About ATB Author Food & Drink In The Press   Comments Off on All Things Bugs: We’re having conversations with a lot of mainstream food manufacturers 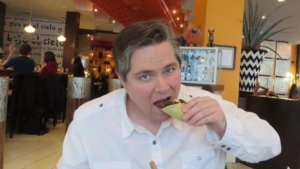 We are trying to move people away from the term “Cricket Powder”.

While cost is a barrier – and regulatory issues need ironing out – mainstream food manufacturers “have been way more open to this [using edible insects in their products] than you would probably think”, says the founder of the world’s largest insect-based food ingredient manufacturer.

And given how long it takes larger manufactures to bring new products to market, food companies want to be ahead of the curve from an R&D perspective by starting to experiment with cricket powders now, All Things Bugs found Aaron T Dossey, PHD, told FoodNavigator-USA.

“In the early days we got a lot of inquires that didn’t really go anywhere, but now we’re starting to get more serious inquiries.  People will buy 3olbs, and then they will come back and buy 60-90lbs….”

END_OF_DOCUMENT_TOKEN_TO_BE_REPLACED

November 11th, 2014   About ATB Food & Drink In The Press   Comments Off on Crickets for Food? Bugs Show Protein Potential

Aaron Dossey thinks crickets might be the next big product for farmers, a drought tolerant crop that could be a valuable food source one day.

Dossey and a handful of other researchers around the world are working to refine the process to dry and pulverize crickets into a powder that can be used as a food supplement for health conscious consumers or malnourished children in parts of the world that can’t support livestock production.

Incorporating bugs into food (rather than trying to keep them out) isn’t as far-fetched as it sounds.

“One of the largest food manufacturers in the world bought 100 pounds (of Dossey’s cricket powder) and is working with it,” he said. Cricket powder appeared as an ingredient on the Food Network show “Chopped,” and a group of Harvard researchers are using it to create a tortilla chip. Dossey’s powder has been included in bars made by Exo (which is available on JetBlue flights) and Chapul, a company featured on the show “Shark Tank.”

END_OF_DOCUMENT_TOKEN_TO_BE_REPLACED

All Things Bugs…So What If You Want To Try Some Insect Powder?

July 1st, 2014   About ATB   Comments Off on All Things Bugs…So What If You Want To Try Some Insect Powder? 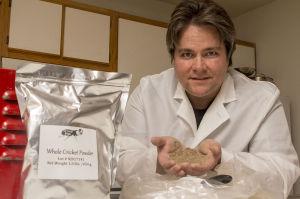 So where can manufacturers get hold of some insect flour to play with?

One man who can help is Dr Aaron T Dossey, Georgia-based bug enthusiast and founder of All Things Bugs, who is working with a contract manufacturer in the northeast to produce ingredients (initially whole cricket powder, but in future a whole bunch of other bug-based products from meal-worm powders to meat replacements) using his patented process.

Unlike some other cricket crushers, Dr Dossey grinds the frozen insects before drying and heat treating them to kill any microbes. This is more efficient than drying the whole insects and then milling them, he claims, as it requires less heat (insect bodies are made to withstand heat and conserve moisture) and preserves more nutrients.